TerraCOH believes it can tap the potential of geothermal energy

TerraCOH believes its power system can tap the potential of geothermal energy
By Mike Hughlett Star Tribune
January 7, 2017 — 9:40am 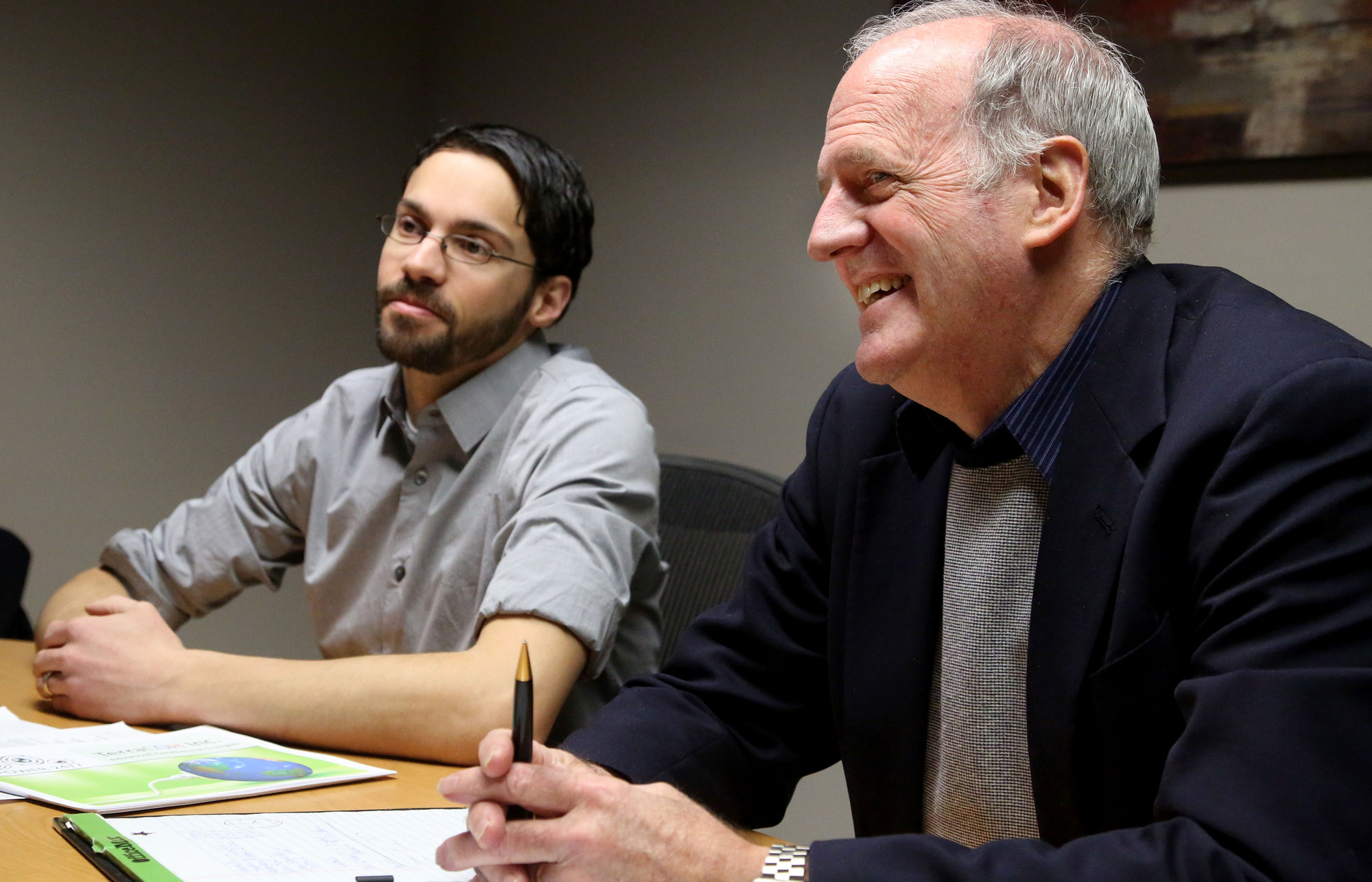 
TerraCOH’s vision is grand. The fledgling firm would use carbon dioxide emissions — a nemesis to the planet — to power a ­geothermal energy system, which would in turn produce low-cost, clean electricity.

And TerraCOH’s patented geothermal technology could serve as a big underground battery, effectively storing renewable — but intermittent — wind and solar energy. Now, the Minneapolis-based company just needs money to turn its plans — about eight years in the making — into reality.

The good news: TerraCOH believes this year it will fire up a small-scale commercial version of its power system. “We are ready to build the power plant,” said Jimmy Randolph, TerraCOH’s chief technical officer. “And we’re trying to raise the money to do that,” chimed in Chief Executive John Griffin.

TerraCOH, which has its roots at the University of Minnesota, so far has been financed with more than $5 million in grants from the National Science Foundation and the U.S. Department of Energy. Last year, the company began soliciting private investors to commercialize its ideas, with Griffin leading the way.

Randolph’s adviser at the U was Martin Saar, professor of earth sciences. The pair, along with Thomas Kuehn, U mechanical engineering professor, invented a renewable energy technology called CO2 Plume Geothermal. The university holds the patent and would split royalties with the three researchers if the technology becomes a hit.

TerraCOH has also worked on its technology with researchers at Ohio State University and Lawrence Livermore National Laboratory in California.

Geothermal is the cheapest form of energy, according to data from the U.S. Energy Information Administration, but it’s not widely deployed. Traditional geothermal energy projects must be near places where the earth is hot relatively close to the surface. These hot spots, though, are limited geographically.

The deeper you go, the hotter the earth gets. So, Randolph and his co-inventors developed a method to tap geothermal heat that is 1 to 3 miles below the earth’s surface. This deep heat resource is much more widespread, but cost-effectively mining it is difficult.

TerraCOH’s technology uses “supercritical” CO2 to efficiently unlock that thermal energy. Supercritical is a chemical state somewhere between a gas and a liquid. It’s dense and has a lower viscosity than water, so it flows easy. Oil companies use compressed CO2 to scour the last bits of petroleum from conventional wells.

In TerraCOH’s system, supercritical CO2 heats up as it’s pumped lower into the earth and is stored in porous sedimentary rock. The hot CO2 can then be drawn back up to the earth’s surface — without costly pumping — where it spins a turbine to create electricity. It’s an energy loop, basically.

The equipment needed for this process has become viable over the past year, Griffin said. ­TerraCOH needs to raise $2 million to build two small power plants with 100 to 200 kilowatts of generating capacity. By contrast, a good-size wind farm can pump out 200 megawatts.

TerraCOH is eyeing existing oil and gas fields for its early projects, since they’ve already been drilled.

The company is planning a small power plant at a conventional oil well in northwest North Dakota that will produce electricity for that site. For this project, TerraCOH will harness the geothermal energy provided by oil and gases coming up the well, heating CO2 in an above-ground tank, which will then power a turbine.

But the long-term goal is to place TerraCOH Plume Geothermal systems near coal-fired or gas-fired power plants, directly capturing CO2 emissions, pumping them into the ground for eventual use in bigger CO2 fired-power plants. These plants would initially generate up to 15 megawatts, but could eventually be up to 300 megawatts.

Another goal is to use the geothermal system as a “battery” for solar and wind power. The drawback to renewables is that they are intermittent, producing when the weather is sunny or windy. Currently, chemical batteries are too expensive to store large amounts of renewable energy.

But excess wind and solar power could be transmitted to a TerraCOH plant, powering pumps that would inject CO2 into the earth, from where it could eventually be turned back into electricity when needed. Plume Geothermal “is not intermittent,” Randolph said. “It’s 24/7. You can run it on demand.”

Legal Information
TerraCOH, Inc. has established this site to provide its visitors with convenient access to company information. While the company has undertaken efforts to provide accurate information, it is not comprehensive and the company makes no commitment to update the information at any particular time. As a result, the information may not be accurate, up to date or applicable to the circumstances of any particular case. TerraCOH, Inc. disclaims any liability for any inaccuracies or omissions in this website and any decisions you make based on information contained in this website are your sole responsibility.

Copyrights
All the contents of this Web site and downloads from it are owned directly by TerraCOH, Inc. or indirectly through its subsidiaries unless otherwise stated. A special thank you to Shannon Gilley, along with the art and design teams at MCAD, UMN, OSU and AI for the artwork associated with the CPG™ process, courtesy of the CPG™ video. All rights reserved.

Confidentiality
If you send e-mail inquiries to TerraCOH, Inc., certain personal information will be used only for the purpose of responding to your inquiry. Although our suppliers of Web-related services may see your details, neither we nor they will pass them to anyone else outside TerraCOH, Inc. without your permission.